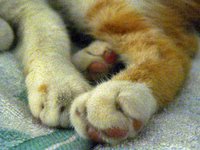 Casper was still feeling under the weather. Not in any mood to eat or drink. My wife wanted to help out to take him to the vet, but there was nobody to hold the fort in her office. It is the start of the first day to work for year 2006, but looks like I have to take the day off to take him to the vet.

No problem. After consoling Casper, he was making lots of meowing noise. I guess he needed to use the litter but with the hurt leg, had trouble walking over. Gently as I could, I carried him over. Casper made a meow of protest as I lifted him up and settled him down, but he needed to do his business.

Readied the traveling cage, had to coax him into the cage with a gentle push. I guess he knows where he is heading ’caused he started to protest. Well it was for his own good, though he didn’t like the clinic.

The journey was as usual, with lots of meowing from Casper. He still has not overcome his phobia of riding in the car. He must have thought that the car is some giant metal monster ready to devour him in its belly!

Traffic was light as I timed to leave the house after the morning rush hour. Ah, felt good to be on leave. It’s the start of school in the New Year, and I supposed many of the parents took leave to send their kids who are to attend school for the very first time. Must be quite traumatic. There will be lots of crying and probably screaming as well.

Arriving at the vet clinic in good time, with Casper still meowing away, I walked over to the clinic after parking the car. No other pet patients around I was shown into the examination room after the routine checking the pet registrar for Casper medical records.

Dr Dhillion checked Casper, and true enough there was some what look like inflammation on the hind legs’ paw. He reckon that Casper scrape on something to receive the wound, probably while escaping from some cat or something. A shot of antibiotics and some rest would do the trick.

But what the Doctor was not pleased was Casper’s weight. He is not growing as big as he should be. I guess Casper’s favourite ‘Careline’ cat can food was not as nutritious as it should be. No more can food for now, only Royal Canine food pellet for now. Hmmm, looks like I will just reward Casper with the can food during the week end.

Bringing Casper back to the house, on a rather quiet return trip to the house. Though he was pleased to be let out from the cage, but he could not walked about much. Went back to snoozing on the couch. Well not much he could do till the abscess clears from his hind paw.