The Vines Apartment in Swan Valley was truly a great accommodation. Only problem was that it was located quite far away from Perth city, Australia. It takes about 50 minutes of driving from Perth. You may wonder why we ended in such an isolated accommodation. Well, sometime ago we joined Sara Worldwide Vacation Club which was affiliated with Interval International and decided to use up the points or it will go to waste. It seemed like a good idea at that time to join up, but like most timeshares, there were many restrictions and limitations. Though the apartment accommodation provide was superb, and the number of affiliated hotels, resorts and accommodation worldwide listed looked a lot but the actual number of available hotels and resorts for each specific region and timing were actually rather limited. 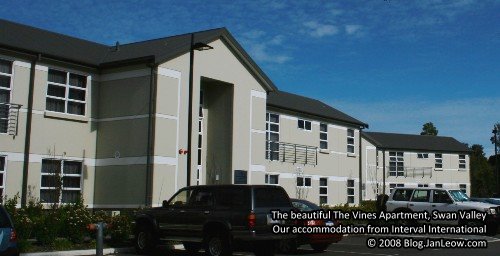 Vacation club in my personal opinion was more suited for westerners and people who preferred to just sit back and relax in the resort itself. Unlike most Asians like us, whenever we go visit a country, we prefer to move around and go for sight-seeing. Of course, most travel agent tour itinerary would include museums and prominent landmarks but that was not to everyone’s liking. Enough of stuffy old museum with antiquities and ancient civilization. We are here for the present, though some stories of the past would spice things up.

The Vines Apartment that we got was two rooms and was able to accommodate 4 person. Since there was 5 of us, 3 of us shared the master bedroom which has a Queen size bed. There were two separate well equipped bathrooms. The living room was spacious with a medium size LCD TV with a JVC Hi-Fi set capable of playing DVDs , a desk, two sofas and a dining table. Wall mounted LCD TV was also provided in the master bedroom so we did not have to get stuck watching the same TV programmes. The kitchen was build along the corridor complete with microwave oven, kettle, toaster, stove, and with various utensils. A washing machine with drier was provided as well. With the laundry unit meant that we could reduce the amount of clothing we had to bring as we could wash our clothes. Still it was a wonder how we ended up bringing so much luggage. On closer inspection, we brought a tad too many warm clothing. Well it serves to be prepared. Though it was not as cold as I thought it would be for an end of Winter season.

One thing caught us by surprise was that housekeeping was only done once for the whole duration of our one week stay. If we needed housekeeping, it would cost us A$70 each time! Oh, well, we could live without that luxury. How dirty could we get? Actually the seniors did get the bathroom somewhat messy since they were not experienced travelers. Could also be the bathroom design since the water splashed out to the main bathroom floor when they were having a shower.

The grounds of the Vines Apartment were simple but beautiful. Located next to a golf course, we could see the greens. Being so far away from the city, inevitably wildlife did pop in once in awhile. The first morning there was a trio of kangaroos around our yard. Should have taken a snapshot but at that time I just woke up feeling a little groggy and not thinking quite straight. Though they didn’t return for the rest of our stay, a pair of ducks did drop by twice for some breakfast. 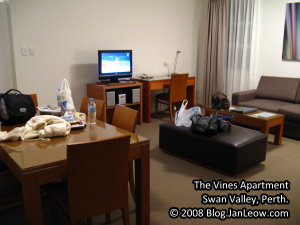 Getting there for the first time, we were a little apprehensive. Since we drove there at night and we weren’t very familiar with the roads. It took us a little longer to reach The Vines Apartment traveling at a slower speed. We made one wrong turn at the Tonkin / Reid Highway and had to double back to right on track. Earlier Catherine gave us a set of directions which she obtain from the internet. One look at it I decided to give it up in favour of the directions given by Interval International. It was simpler and easier to navigate using the main roads rather than criss-crossing via the small roads.

Here’s how to get there:

From Perth go north using the Mitchell Freeway. Go east on Reid Highway (along the way watch out for Tonkin Highway and don’t mistakenly drive straight into it because Reid Highway will turn a sharp left at the traffic lights). Turn North on Great Northern Highway. Turn left on West Swan Road (after the bridge). Turn right onto Millhouse Road (can see a big signboard to the Vines). Turn right on Chateau Place. Turn right on Verdelho Drive. The Vines reception is at the end of the road.