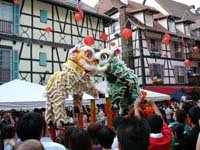 Yes, it is the year of the dog. Hopefully, we don’t have to work like a dog this year, but somehow I think not!

Just backed from CNY holiday. What a blast! Reunion dinner and all. My aunty from Raub invited us over for overnight stay as my Uncle Aaron was giving treating us a CNY dinner. And my sis-in-law also managed to get free stay at Silverpark Apartments in Fraser’s Hill. Well, to make full use of this trip, I decided to cram in a few sight seeing / fact finding / photo taking session opportunity.

First, I made a stop at Bukit Tinggi Resort and visited the Colmar French town and Japanese Garden. Since I’m building a site about highlands I may as well write about other highlands that are related to Camerons. My Parents-in-law also had not been to Bukit Tinggi so it was like killing two birds with one stone kinda thingy.

It was a good time to up to the French town replica. The Berjaya Management knows that in order to keep the visitors coming, they had to organize activities. Sure enough there were the usual lion dances for the Chinese New Year for luck and prosperity. Lion dances are always a hit for just about anybody, not just for Chinese, the Malays, Indians, and Gwai-Lo were just as fascinated with the acrobatic antics and prowess of the Lion Dancers.

I spotted a few spectators sitting precariously on the window ledge of the French town trying to get the best possible angle for a photo shot!

And the din from the lion drums! It really has a New Year mood to it! Relaxing at one of the tables, eating pizza and drinking coffee, my dear wife remarked that it felt just like the vacation we had in Melbourne Australia. Yep! Felt good to just sit down and not worry about a thing. Ah, if life was always like this!

After the Lion Dance was over, we took a few family shot of the place. But before we left, I needed to grab some more photo of the Japanese Garden. Though my wife and parents-in-law were tired and didn’t follow me. I think they should have, as the air in the garden was pretty refreshing. However I was a short on time as we had to rush to Raub for the dinner on time. Still I managed to get as many photographic shots as possible. Pretty nice nature photography, with the Zen like garden. Wish I weren’t so rushed; I could do with a bit more relaxing mood and take my time for better composed photographs. 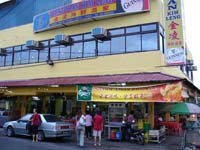 The journey to Raub was pretty rushed and we managed to get there on time for the dinner. The food was good and everybody enjoyed the dinner.

My aunty worked and stayed in a shop house all this while, but she had a good heart and allowed us to sleep in the “box” room where it was the only room with air conditioning. Without it, I doubt I could sleep well as I not used to hot humid temperature. Me, my wife and Lindy cramp onto the bed and well, we managed to get some sleep.

The next day, we proceeded our journey to Fraser’s Hill. It is a smaller highland in comparison with Cameron Highlands, but never the less it was still a good alternative. There was a route from Raub to Fraser’s Hill and the distance was only about 40km though the road towards it was rather winding.

We reached the area known as the Gap where the traffic to the top of Fraser’s Hill was controlled. The authorities had to this as the road was narrow and it would be safer to allow a one way traffic. The authorities actually build another road so that there was no need to control the traffic by making each road a one way direction. But ever since a landslide occurred on the new road, I guess the authorities deemed the new road unsafe and opt back for the old method of controlled traffic. Besides, the amount of vehicles going up and down Fraser’s Hill weren’t that many anyway. 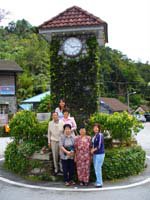 I guess the Silverpark management were not use to heavier than usual visitors and we had to wait quite a while for a room to be ready. After finally checking in, while my wife, family and relatives had a rowdy time playing mahjong and watching Cantonese VCD which Lindy had the good sense to bring along, I went off alone to explore the area and to take as many photos for future articles about other highlands.

Since there were not many good eateries available in over there so as usual, my aunt and mom-in-law prepared chicken pot rice and brought over there for dinner. Yum! Taste good on an empty stomach!

Night time activities were the usual mahjong and watching Cantonese VCD, leaving me with nothing much to do but to go to bed early.

Next day, I continued my further exploration of the area and visited the Allan’s water (pond) and Jeriau waterfalls. And to my surprise, it rained on me! I guess CNY was not as hot as it should be. Still I managed to take some good shots and collected some info from the Fraser’s Hill tourist information office.

Strangely, the only two Chinese eateries owners were known to my Aunt. It seems they bought many of their utensils and stuff from my aunt’s shop in Raub. Talked about a small world. Yep we had our lunch at Hillview restaurant and Laksa at the Kheng Yuan Lee Eating shop.

Next of course, it was time to checked out of the apartment and sent our aunties back to Raub. Staying one night in Fraser’s was sufficient enough, but could have done with a second night.

After having dinner in Raub, we made our way back to Kuala Lumpur and reached home pretty late what with the heavier traffic as many people were rushing back to KL to get ready for work the next day. Phew, what a trip!