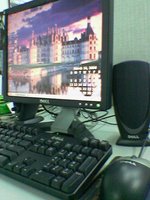 Finally, I get to work with a new office work PC. Well almost. My old PC was really messing up my eyes. For the past six months the screen has a way of turning purple as though it was having a asphyxiation fit. If seeing things in the color of purple wasn’t bad enough, the screen has the addition of going through a temporal phase blur effect. This definetely will cause my eyes to become really, really bonkers trying to focus on something that wasn’t even defined in the first place.

The first thing to do was to give it repair procedure number one; a very good hard wack on the monitor. If I was lucky, the monitor reverts to its pristine display. If it was in a grouchy mood, it remains in its distorted display. This went on every few days for the past six months. With the loud noise when I wacked the PC, it really disturbed my colleagues and they asked me to quickly go purchase a new PC pronto! Yes, yes, I will. It’s just a matter of time.

Finally, enough is enough, the Acer PC was quite old anyway. Got it around 1999. It has a Pentium II CPU running at 350MHz. It was considered quite good at that time. But technology has moved on and all the new applications were pretty resource hungry. Making it run on Windows XP from its original Windows 98 sure really makes the HDD grind a lot whenever an application starts up. With several upgrades I managed to squeeze out seven years of service out of it. Time to consign to an easier work task.

I managed to show the phase blur effect to my boss and he agreed for a new PC purchase. But I will have to pass it to one of my staff whose work processing seems more heavier than mine and use hers instead. Well, have to follow what the boss says. After all, submit to authority and obey (Colossians 3:22). But we can always negotiate, right? So I will take her older PC and upgrade the memory to 512MB and get to keep the new monitor. At least somekind of compensation for six months worth of weary eyes. At one time I though my eyesight power was increasing and I might be getting long-sighted too. Thank God, a quick check with the optical shop, I found out that it was still maintaining at the same power. It was just tired eyes after all.

Going through the DELL website and looking out for their offer in the newspaper, I managed to pinpoint a model and customize it for use in the office. It has quite a good configuration. A Pentium 4, 2.8GHz with 1MB of L2 cache, HT and 800FSB. Not to mention dual channel memory and SATA hardisk. Very fast and quiet too.

Oh, well no matter. I will have to settle for a older Pentium, 4 1.7GHz Dell PC. The specs weren’t so impressive with only 256KB L2 cache and after upgrading the RAM, it has 512MB DDR-266MHz SDRAM. But it was still quiet and has a very slim profile to it. Compared to my old junk, it was like a dwarf facing off a giant!

Took me a few days to configure and transfer all the data between the three PC. Finally I get to get mine moving on. Ready to face the daily grind of work nonsense? My PC is, but for me, not really… I should really look for a work where I can really get my teeth in it and still earn enough to cover all my expenses.

No matter, believe and it shall. So I’ll continue to hack on my Cameron website and one day I shall be free from the drudgery that it’s called work. Better to work with passion and joy than to work with pain and suffering.

For now, let me enjoy some fairly new piece of equipment.