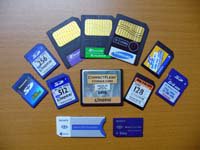 While sorting through my drawers filled with digital devices, I finally found my LG flash drive receipt. With the receipt I could now submit my faulty LG 512MB flash drive for warranty claim. Yeay!

It seems nowadays there’s so many type of card system being developed with the old cards becoming obsolete and newer improved version to be used on digital devices. Well I guess that’s the price of digital progress.

I have my very first compact flash card that I bought way back in 1997 costing hundred of Ringgit for a mere 8MB of storage. Now for the same price one can get at least a 256-512MB storage card! In future who knows as the price per megabyte continues to drop. Compact flash card is decreasing in their popularity. I guess the card system is rather dated. So Canon camera is making their shift from compact flash to SD Cards.

I have smartmedia cards that look like mini floppies, but this too is going the way of the grave. But my out of date Fujifilm camera still functions well, so I guess I will continue to use the digital camera till it breaks down.

With the potpourri of cards that I have, I decided that future digital equipment purchase will be at least based on the memory card that I have. One of the more popular storage card systems is the SD/MMC card. I have my Palm device and Panasonic Lumix camera that uses this card system. And to a limited extend my Nokia handphone that can only use MMC card. At least the MMC card can be used on my PDA & digital camera even though the transfer speed is slower than SD card.

My wife though, got herself a Sony Ericsson handphone. Guest what? Another card type. Sony only uses their own proprietary card system. Trust Sony to always do something different from the market. The phone may be great but the Sony memory stick is expensive. More so than SD Card.

Another card system is the xD card system developed by Fujifilm for their cameras. The SmartMedia cards can only go up to a maximum of 128MB, Fujifilm decided to develop another system that can store more data. But so far only Olympus is using this system, so this card system is also not very popular.

One thing is certain; change is a constant in this world. And if one does not keep up with change, like the old technologies, obsolescence will take over. Same goes with life. Comfort zone is no more. Like the proverbial frog that quickly jumps out of the hot water if it was place in, but will be slowly cooked it was place into the cool water then slowly heated up to boiling point. We too have to keep an eye on the changes in the world and jump from one pot to another, less we get cooked and get burned in the job we are in.