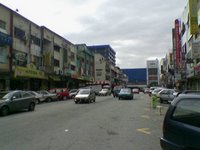 Monday mornings tend to be blue, especially after a nice weekend zipping around from Church to fellowship with friends and family members as well as shopping spree in the malls.

Well after all the dinners and shopping of weekends, my wallet was almost emptied of its Ringgit. So come this Monday first thing to do was visit the bank’s ATM machine to withdraw some cash and fill up my wallet. The transaction proceeded smoothly and I decided to hurry back to the office.

I always liked the lucid morning air when the streets were not so busy and most people were just getting ready to start their daily activities. But this morning as I rounded the corner from the Post Office, I saw a group of people crowding around near the newspaper vendor. Curious, I went for a closer look and saw a young lady fainted (or rather in shock) on the road and held in the arms of a man. On lookers were chatting excitedly but not doing anything much.

So I asked, “What happened to the lady?” The answer was rather vague but from what I could gather, she was knocked down by a motorbike ridden by two Indian guys traveling in the wrong direction of a one way street. (Different from the initial answer which said that she fainted and fell down from a bike, how the story gets distorted!) It could have been a snatch attempt or just plain pure accident as her hand bags and belongings were still with her. However since everybody was concerned about her condition, no one had the right frame of mind to jot down the bike details.

Her face was rather pale. And the man should not be holding her by the arms as the blood will flow away from the brain. So I asked everybody to step back to give her some breathing space and also to ask the man to lay her flat on the ground as I contemplate the next course of action. Someone suggested taking her to the clinic nearby, which was a good idea since she needed medical attention.

At first four persons including me lifted and carried her, but halfway through only three of us carried her. Why the other guy did not help further I wouldn’t know? She may be petite, nevertheless still heavy and I had to focus on carrying her. Still managed to get her into the clinic.

We mentioned to the nurses of Clinic Lutheran that it was an emergency and quickly placed her on a bed. The doctor had just finished consulting a patient and quickly attended to her. All this while she was in shock with her eyes wide open and never uttered anything until after the doctor examined her. Then she started to move her hands and moaned that her head hurts and wants to know who knocked her down. Ah, finally some signs of life! If a patient can make such noise and demands I assume the injury was not so bad. Sure enough the doctor declares that her condition alright but just to make sure, she should be take to the hospital for x-ray and further examination in case of head trauma and concussion.

I could take her but that would mean canceling my customer’s appointment. But I’m not about ready to take her just yet, though I could pay for her medical fees and take her to the hospital. I asked around the good Samaritans that helped me carried her to the clinic only Ayob the Nasi Lemak seller was willing to take her to the hospital. The other guy from Putrajaya was bike user so could not do much to help and also had other work commitments to attend. Looking at Ayob’s car, it was a two door car and it would not be easy to take her in his car.

Finally all was arranged and her colleague will take over the job of looking after her.

What a morning! All this took about an hour to sort out but it did leave me with a good feeling though I was all sweaty from the carrying and running up and down.