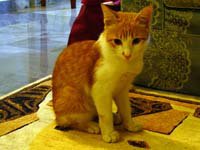 Boy, this will my first trip away from home leaving my pet cat under the care of my brother. What with his odd working hours, I guess Casper will have to wait till my brother returns to get fed.

It’s been awhile since I blog about Casper. He has grown since I first found him on the streets. A young scared little kitten then, he is now pretty big, and much wider than my computer keyboard when he stretches!

He has grown quite attached to me, and I pretty much like him too! Maybe too much, cause he is now way too ‘manja’ and likes to cuddle up to me. Even now while writing this blog, he is sleeping quietly next to me!

But this trip up to Cameron Highlands for a period of 3 days and leaving Casper on his own has made him missing my company very badly. So much so that, wherever I go around the house, he will follow. Sometimes it’s too much, and I have to lock him out of rooms like when I’m having a shower or cleaning out his litter. And when I do that, he will starts to cry out for me!

He is pretty much a domesticated house cat! Probably not able to scavenge his own food and he is very particular about what variety of cat food that is served to him! Cat food that doesn’t appeal to him, takes much longer or even not at all eaten. Though I managed to source for a cat food called ‘Careline’ that he likes absolutely very much! He will actually wallop the whole can in one go, unlike other brands where there is a ‘to be continued’ part two of eating the meal.

Hah! I guess this holiday trip of mine might have taught him a little lesson to be appreciative of my taking care of him!