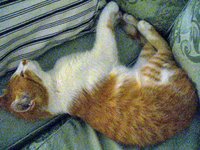 I was expecting my usual morning call from my pet cat, Casper. But today it was silent. Well it is not uncommon because on some days I don’t hear his morning meows anyway. So I didn’t think much about. I woke up did the usual morning routine and had to dump the laundry into the washing machine.

The morning was very cool with the previous all night long rain. The sky was cloudy and still a bit of drizzle. Well there goes my hot sunshine which I need to dry up my clothes.

Ah, opening the kitchen door I saw good ol’ Casper on his usual perch sleeping. Must have gone wandering around the backlane again and came back tired. He did wake a little and had a look at me before promptly going back to sleep.

After dumping the clothes into the machine I proceeded with breakfast. Then he woke and came down from his perch. He was not his usual ‘manja’ self and didn’t want his breakfast. He walked with a noticeable limp on his right rear hind leg, and wouldn’t let me stroke him or touch him.

Hmmm, looks like he got into a scuffle or maybe he just fell down somewhere? I think a scuffle with another car is more likely. Closer inspection of his leg doesn’t look like much injury. Possibly a bad strain or pain from being wacked by another cat.

Couldn’t console him much, but guess he needed to rest a little. He went over to the living room couch and continue with his sleep, waking now and then to see what I was up to.

Yeah he got hurt again just like the last time. Well not much I could do but to let him rest. If it gets bad, I will have to take him over to the vet. Looks like he will have to stay on the couch all day long to recover from his injury.