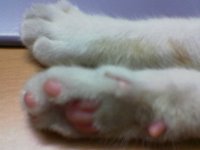 Casper is pretty restless and always wants to expand his curiosity with his usual daily roaming around the neighborhood. However, his sense of direction is rather poor. If he went out of the house from the back, he would return the same way. If he went out through the front door, he must return back the same way. He did not know how to find the way back from the back alley. And if he somehow found his way from the back alley to the front of the house, he would not be able to go back from behind.

Now why would this be a problem? Well, the back kitchen had open grills and it was relatively safe for me to leave a door or a window open for his ins and outs. But the front door I always locked up for safety. Hence he would not be able to come in to the house should he somehow ended up in the front of the house. And because of his poor orientation of the area, he did not know how to go the back alley to come back in. Hmm…, looks like I must teach him how to recognize the surrounding area.

Just last night, he sneaked out through the front door which we had forgotten to close it fast enough while returning from Grace Klang Church. I couldn’t stop him, cats are by nature curious, and where we try to prevent them to go, all the more they must explore it to satisfy their curiosity.

I’m sure he must be pretty pleased to be able to roam out front. A new area to roam, new grass and plants to smell. New corners to poke their head in where they shouldn’t. He must have traveled far.

I call out to him with my usual whistle call, but he just refuse to return. Well, I couldn’t wait any longer. I needed sleep and was tired from the late night at the Church. Perhaps it might teach him a lesson that the door would not always remain open for his return.

About six o’clock in the morning, I woke up briefly to use the bathroom. I decided to may as well have a look-see and went to open the front door. Sure enough, Casper coolly trotted in somewhat pleased with himself. Must have waited quite a long while. Would have been good with his return and I could have gone back to my slumber. But lo, no, he smelt of excrement, and his fur was soiled.

No choice, can’t have him roam about the house like this. For his punishment, I will just wash all his legs with the cold tap water. Using the pet shampoo, I was able to clean all four of his legs up a bit.

Protest, protest, protest. Well he could meow all he like, but he needed to be cleaned up. It was not a complete wash, since I never rinsed his whole body. I think I will bath him when I return from work later that day.

So back to sleep I went, while Casper licked himself dry.

While preparing to go to work, I spied him sleeping soundly on the usual perch by the kitchen grill. Too tired to come down to give me his usual morning call. Well, I hope he learned his lesson!