With the looming Chinese New Year just around the corner, traffic really was getting into a snarl for the past few days. Fortunately I was able to come back home early after making a sales call. I had been fasting since Monday and intend to carry on till Friday. It was just a simple fast, having some breakfast and fasted till late afternoon/evening. The purpose for this fast was seeking salvation for unsaved family members, to have child, and financial freedom from work drudgery. This was not a full fledge fast as I still get to drink water which helps. Seems to work, especially on work, orders seem to come by smoother. Hope it will continues as I try to find the time to work on my website.

Prophet Victor was still around and there were meetings on 24th and 25th January in Grace PJ. Though I was rather too tired to attend the Tuesday meeting, I must attend the Wednesday meeting as I was on duty on keyboards for the praise worship at the beginning of the service. It was rather rushed with all the heavy traffic but managed to get there early all the same. My wife parked the car while I rushed in to the hall to prepare for praise worship session. 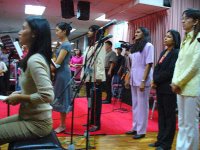 Practice was non existent but the worship leader used back the same songs that played for the 50 hours Praising, Praying, Prophesying, Preaching session. This time round, I used the keyboard that was provided there as I had used it previously on harp and bowl session. Still it takes getting used to as it handled differently from my own keyboard. 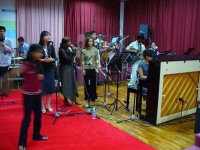 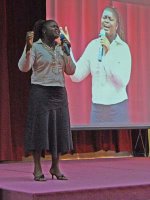 Prophesy after prophesy was given out to many individuals. It seems like it is mostly about financial gain and some about ministry work. I guess building a church requires money and it will take people who has the financial ability to give to God for it to happen. Again the call for the covenant between business people with the pledging of RM2007 for millionaires breakthrough by year 2007. RM2007 is still too much for me, so I just let it slip through for now. A covenant is like a contract between God and man and it cannot be broken. But I still felt it was too general and more the masses who believe they can get a breathrough, then they shall go for it. After all what is RM2007 if the returns is a million dollars? 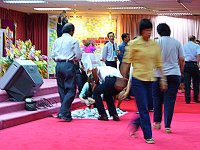 Fortunately there was also a smaller calling of RM80 for new beginnings which I decided to “invest” in God with it. I do certainly hope it will come through. I remember in the Bible where Jesus was walking on waters in the storm, and Peter was the only disciple to heed His call and walk on water by faith. He faltered when he saw the trashing waves and began to doubt. That’s when he started to sink. Well let’s hope my faith do not falter and hang on strong on God’s favour for new beginnings and favour for smooth going in the things that I do.

Not all prophesies were good, there were some warnings too and he prayed over it to break the plans of the evil one. 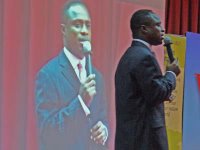 The prophesies were very accurate as it came from God. According to him, he hears it, and sometimes messages flashes across his eyes. No easy task to attain this level of intimacy with God. He fast almost daily with prayers and worship. I think I’m beginning to see the good effect even with the simple fast that I had task myself to do for this five days.

And lastly, the last event for the night was the annointing of oil on every person that attended this meeting. The oil was prayed over, and later annointed to each and every person’s forehead. I could feel a strong holy presence and could not really stop my body from shaking. There was like something urging me kneel, though I resisted initially, but finally I gave in to kneel. Submit and humble oneself to God for He is most holy!

The session ended about half hour to midnight, though there was further praying for some of the other members whose prophesy of warning was serious enough to warrant additional prayers.

Ah, left the meeting tired but somewhat pleased. Hope and faith that things will work out well one way or another as my wife and I took the journey home.