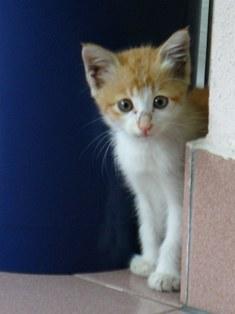 While driving to my bank to deposit a cheque one night, I happen to chance upon this kitten on the main road in TTDI. Almost ran it over! Being unconcern with the traffic zooming by, I fear this kitten might be ran over by other cars. But why would a mother cat find such an exposed place as the main road to rear the kitten? Perhaps it was left there not by the mother cat but abandon by some previous owner?

So I turn around the car and decided whether I could somehow catch the kitten. I parked the car by the side, got out and started looking along the road side, watching out for this kitten.

Knowing well that stray kittens are rather difficult to catch as they are wary of humans. This kitten is no exception; it ran away as soon as I approached. It quickly ducked into a roadside drain. I thought, “Oh, no! I may not be able to catch it if it goes in all the way!”

Nevertheless, the kitten did a quick sneak at me, “Ok, this is my chance!”, as I squated and stretched out my hand. Aimed for behind the neck where the mother cat usually carries kitten, and got it! 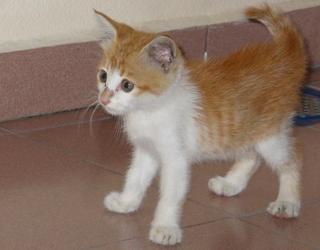 Carried it back to my car and placed it on the passenger side of the car. Well the cat was pretty much afraid and resorted to going under the seat, jumped up on the rear seat and proceeded climbing up the rear safety belt all the while making loud bellows of meows. It finally settled on the rear dash board and making loud sounding meows! No doubt calling for assistance.

Well, I still needed to do my banking duties, so I hurriedly did all that was necessary, before going back home with my new found charge.

First night in its new found home, the kitten hid behind furnitures and eventually found it favourite hiding spot behind the washing machine. It took me a while to pacify it. With no cat food, I fed it with whatever was available in the house; bread and water. It was pretty hungry gobbling up the bread! To give the kitten some sense of comfort, I place a paper bag for it to hide and sleep in.

Eventually after some days, it came around to feel secure enough not hide in paper bags or behind washing machine. Now, it is very sticky! Whenever I have leave it alone, it will meow boisterously calling for attention! 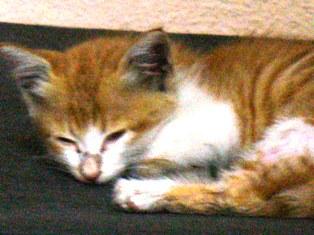 Sure, it looks so cute and “manja”, but I’m not that free to entertain the little fella! I hope it will grow out of it! And yeah, it’s a boy (I think so). For a tomcat, he is such a timid one! I wonder how he will hold his territorial ground when he grows up and fend off other toms!

Still thinking of a name for him, Rusty? Jasper? Casper?
Anyway, cats don’t really know their name. They just the listen to the tone of their name… (as wrote by some books, ah well.) despite what TS Eliot says about a cat staring into space contemplating about something!

At 18/2/08 2:31 PM, Anonymous said…
I love kittens 2..I also took in a kitten abandoned by its mum last Sept. had 2 bottle feed it as it was abt 1 week old then. Now ‘Sumomo'(Named by my girls) is a healthy fisky little kitten..orange & white jist like your Casper.