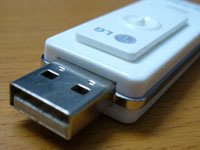 “They don’t make equipment like they use to.” That’s what most people say nowadays. I feel it is quite true too. Seems like 1 out of 10 electronic device or component that I buy ended up with some defect or something. And the latest casualty is my wife’s LG 512MB flash drive.

The flash drive went dead during one of her business trip. She was afraid it was something she forgot to do like shutting down the device to safely remove it from the USB port. Well, she shut down the laptop before pulling it out, which should be fine since the power to the flash drive would have cut off.

Whatever the cause, the flash drive is dead and it took with it the valuable data that was stored inside! Luckily she just uses it to transport her files and not use it as a main storage.

The problem now is, where did I put the sales receipt and warranty card? I’ve been searching high and low around the house, but it was nowhere to be found. Without it, I am not able to claim warranty and get a replacement. Sigh! Hardly use the flash drive for two months and just like that, it goes dead.

Maybe should have bought a more reliable brand like Kingston instead of going for flashy design of LG. Had to pay extra too for its high speed and stylish design!

I guess as the manufacturers tries to lower cost and maximize profits, they make things that just meet the minimum requirement. Items are not made to last so that when it breaks, it is better to buy a new one than to repair it. After all, technology is advancing all the time, and it is meaningless to repair an obsolete product since the parts for it may no longer be available and it is far cheaper to buy a brand new one with better features anyway.

But, this flash drive of mine was hardly used more than two month and now it is kaput? Terrible. Now if only I can find that receipt and warranty card…

And of course I had hard disk that had its IC burn out on me thereby losing all data (I think the weather was rather hot that day), dial-up modem not functioning at all for no apparent reason (nope, not struck by lightning), motherboard going kaput (probably power surge while switching it on), card reader going crazy and not able to read card data, Zaurus PDA motherboard fried from battery power surge (not sure why it happened but I saw some sparks while replacing batteries and that’s when it happened), etc. I guess the list goes on.