My phone rang this morning, and I felt uneasy to receive such an early call from the veterinary clinic. Alas the news was not a happy one as they informed to say my dear faithful Madam Cat has passed on. It was a blow to me as I was looking forward to have her for at least a few more years. 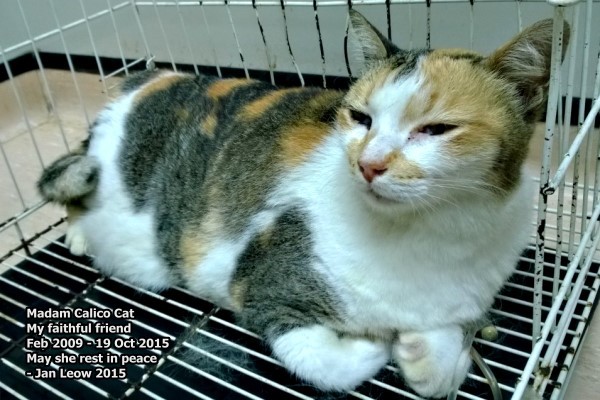 Needless to say, the surgery for the diaphragmatic hernia due to trauma did not go well. I did manage to see her one last time on Sunday after church. She was still reeling from pain from the surgery on Saturday. Though she was in a bad mood, she still greeted me, and I managed to pat her somewhat to ease her a bit. She tried to sit up a few times, but it was best she rested flat. I could see her breathing was still quite laboured probably due to the after effects of the surgery.

It was totally my fault when I came home last Sunday afternoon. I was rather tired after leading the morning worship service and attending a wake in the afternoon. Turning into the driveway, Madam cat was a little slow to move away from my car and I accidentally roll over her. I quickly reversed my car to avoid further injury. But the damages was already done.

She was in pain but look a bit alright. I thought she was shaken from the experience but I didn’t know the seriousness of her injury. I took her to a vet the next day but she didn’t have any x-ray facility. She couldn’t only observed externally. At that time my cat was still breathing well but she was in no mood to eat. She has always been a voracious eater, but this trauma made her lose her appetite. The vet administered a painkiller shot, and she look a little perky.

Next day I had some important work to do. When I returned from work, she was not breathing well. The next day I brought her to Gasing Veterinary Hospital. It was highly recommended. They had x-ray machines and the diagnosis was quick. It was a diaphragmatic hernia where the diaphragm has been torn and the internal organs has pushed into her lung cavity causing laboured breathing. It also made her lose her appetite.

I have to check her in, and she was started on IV drip. They scheduled a corrective surgery on Saturday as they wanted to observed her condition. The prognosis was only 50:50.

In those days leading to the surgery, I visited her and she was glad to see me, and I too. Knowing well the risk of surgery, I made it a point to visit her as it could be my last.

Anyway I visited on Sunday and I could get a final chance to her. I thought she would survive the operation as it seemed all went well. Though I believe she was suffering from pain from the surgery as it was quite a major surgery.

I prayed hard for her survival and was hoping she would be a companion to me for at least another few more years. I estimated her to be about seven to eight years of age as she was already a young adult cat when she came to me. I believed God has sent her to me to keep me company during those years. Because it was unusual that cats come looking for me and my wife always wondered why.

I don’t know whether there is a place in heaven for cats, but I do hope she will have a great afterlife. May she rest in peace as she has kept me and my family company for these many years. She was a lady cat for sure. Very gentle and quiet. She will always have a place in my heart.