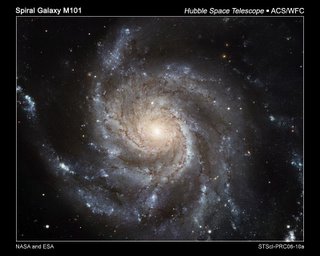 The M101 nicknamed Pinwheel Galaxy is such beaut. It’s been awhile since I last read about astronomy. I guess it just one of my childhood hobby to gaze at stars and wonder whether there is any possibility of alien civilization out there. Given the current state of technology, chances mankind would not be able to venture much further than within the Solar system. It just takes too long to get anywhere. Unless somebody can make head or tails out of some of the new string theories and quantum science coming about; and from there, derive a machine that can either teleport to furthest reaches of space or travel faster than light.

I guess it is just fanciful day dreaming. Still one must start from a dream, and from there achieve a task that was once though impossible. Maybe not now, but perhaps in the future when the scientist can get a better understanding of the new string theories and its multidimensional space and multiverse, and then some contraption will be invented based on all the theories expounded.

Far fetched? Think again. The laser was entirely based on quantum mechanics. So’s the x-ray machine to think a few. So why not one day a machine that can teleport (already some scientist are tinkering with this concept based on some weird quantum memory effect) a person to anywhere at an instant? That will be the end of the transportation industry!

Other proposals used include:

The Hubble exposures have been superimposed onto ground-based images, visible at the edge of the image, taken at the Canada-France-Hawaii Telescope in Hawaii, and at the 0.9-meter telescope at Kitt Peak National Observatory, part of the National Optical Astronomy Observatory in Arizona.