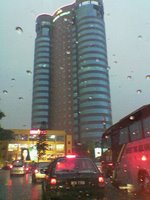 Whenever rain falls the traffic condition in Petaling Jaya or Kuala Lumpur gets really bad. The worlds climate has gone crazy and it seems Malaysia is no different. February month should have been a pretty hot month and it is supposed to be without rain. Alas no, it is still hot but then it pours in the afternoon pretty much cats and dogs.

And when it happens around rush hour, that’s it. The traffic goes to the dogs. One of the poor road design is the traffic circle. It should be consigned to the museum and should be done away and replaced with traffic lights system. But the MPPJ city council unfortunately still keeps them around. Traffic circle is fine if the traffic is light.

And that was the situation where I was caught in at the PJ section 19 aka Rohman’s Circle while returning home from work yesterday. What would have been a ten minute drive in out through the circle became 40 minute ordeal with cars forcing their way in and out. This is when you would like to quickly get in and get out of the circle because the traffic just shuffle along at snails pace.

There’s nothing much I could do but listen to music and grit my teeth and hope to get clear of the circle the fastest possible.