When I first received the YouTube link in my mailbox, I looked through it with a certain amount of scepticism. Don’t get me wrong, I’m a Christian, but there are also many false views pretending to be this or that. However this Pale Horseman of the Apocalypse shown on MSNBC news covering the Egyptian riot was rather intriguing as the newsman didn’t edit it and was shown throughout the world. Now it has been uploaded by various people taken from various sources be MSNBC or other news network. 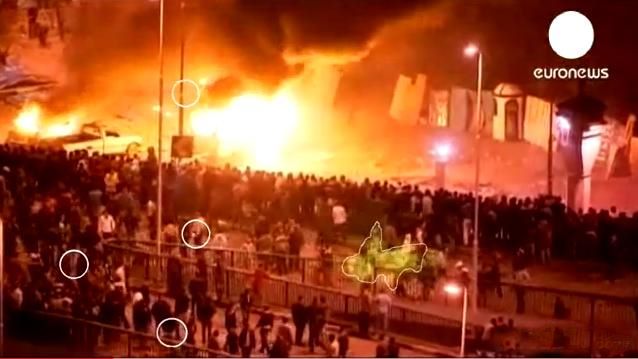 “So I looked, and behold, a pale horse. And the name of him who sat on it was Death, and Hades followed with him. And power was given to them over a fourth of the earth, to kill with sword, with hunger, with death, and by the beasts of the earth” (Revelation 6:8).

The Pale Horseman looked green, but according to the mail that I received, they explained it as the word “pale” in the Greek word chloros (Greek #5515) which also means green. Hmm… that’s twisting the interpretation to match with the Bible verses!

That’s the problem with prophesy, did what was mentioned meant literally or was there another meaning behind it? Sometimes it has to be interpreted in the context of that period when they use descriptive flowery words to convey the meaning or whatever. Since I’m no expert at such interpretation I will leave it as that.

Coming back to the video footage with Pale Horseman, at first glance it looked incredible that figure of a green ghost rider is standing amidst the rioting crowd. As the newsman pans the footage, the ghost rider also moved on and disappeared. Following close behind are four orbs of light that move and disappeared at the same time.

The interpretation of the apparition is that of a Pale Horseman, and the four orbs referring to spirits or devils under the current interpretation that all ghost are not spirits of dead people (since after death they have to go either up or down and never linger around, so familiar spirits are just devils in disguise). And usually ghostly orbs sighted around the world are considered as spirits, and thus the orbs here following the pale horseman mean Hades followed after Death who sat on the pale horse!

Many people online has scrutinized the footage and some has come to the conclusion it is most likely lens flare. Many screamed faked too! However there was no time for the newsman to add in the apparition so the most plausible explanation is lens reflection.

Looking at the 3 street lights plus 1 light source from the tower, you can see the spacing and the angle matches exactly that of the 4 orbs of light. You have to think upside down because lens reflections cause everything to mirror or reverse.

As for the “pale horseman” the only possibility is that of the pickup truck on the top left giving of reflection from the main fire and later bouncing on the lens of the newsman. Though I tried looking at the “horseman” upside down it didn’t quite match the shape of the pickup. Could be a different way of reflection, just a left to right mirror image and the shape fits perfectly. Strange is the way the lens reflection is up to down for the orbs and left to right for the horseman.

Also note that when the pickup truck disappears from view, so does the horseman. 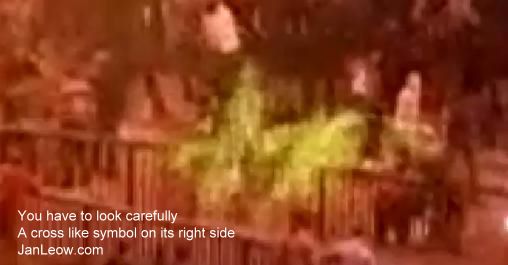 One thing about this footage, it is still very eerie for the coincidence. At the same time, some people zoom in at the rider notice a cross on it. I see it too.

Anyway, the world is strange place and not everything can be explained away. Why is there this apparition appearing by chance from the footage despite being a coincidence of a lens reflection and all?

Not everything can be explained by science and even Darwin’s Theory of Evolution also fails with 50% of the scientific community not supporting it. The evidence do not points to evolution but the contrary.

Anyway view this footage with an open mind as to what it means. A sign or a warning can come from anywhere even if it is just a lens reflection.